It's back again! London’s top pop party, returns to the sunny climes of Herne Bay and the beautiful Kings Hall. This time they’re rocking an 80s and 90s vibes as they pit these two mighty decades against each other in a musical battle royale

Apart from being London’s biggest (and longest running) weekly pop party, Club de Fromage is a staple of the UK festival scene, appearing multiple times at the likes of Glastonbury, Isle of Wight, Reading, Standon Calling, Rewind and many, many more. They have also graced the fabled Hammersmith Apollo and Alaxandra Palace. If it’s pop you’re after you are in the safest of hands with Fromage!

On this seaside excursion expect to hear: Wham, Spice Girls, Will Smith, Depeche Mode, The Jam, Steps, 5ive, Blur, Culture Club, The Cure, Pulp and many more 80s and 90s bangers! So grab your dancing shoes, to join Slow Alfie with his merry crew of disco dollies and get on the dance floor with the club that time forgot at the Kings Hall. 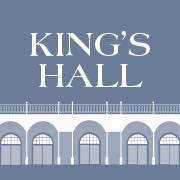